This is the Abusive Sergeant nerf/card balance change coming in October. 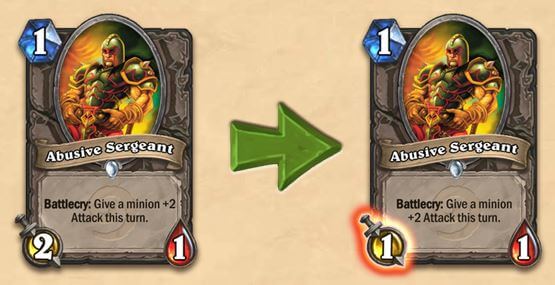 As you can see, the attack value of the card is being reduced from 2 > 1. This is the same change that was applied to Leper Gnome and should have been done at the same time really.

Also a slight adjustment on the card text alignment. 🙂

How Will This Change Affect Abusive Sergeant?

I think Abusive Sergeant will still be used in aggo decks. The +2 effect is pretty strong and while the 2 attack was useful for trading with the board it wasn’t the reason the card was played.

It will still be in Zoolock and Face Hunter I think. Is there a better 1-cost drop that does as much damage to the board and lets you trade up? I don’t think so.

Here are comments directly from the developers about this change to Abusive Sergeant:

Aggressive decks are stronger than we would like right now, and Abusive Sergeant is in virtually all of them. We like that Abusive Sergeant is available to players using minion heavy strategies, but neutral cards in the base set should be narrow enough that they aren’t showing up in such a wide variety of circumstances. We’re changing Abusive Sergeant to be a 1/1 so the battlecry becomes the clear focus, rather than the card being a reasonable turn one option for all aggressive deck types.