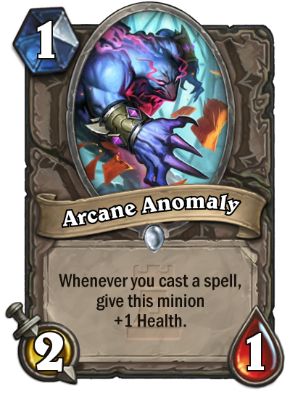 This is the Arcane Anomaly HS Card that’s being released in the One Night in Karazhan adventure due on the 11th August.

It’s a neutral card that reads: Whenever you cast a spell, give this minion +1 Health.

I think this card will be more popular in Arena than constructed. Even in a deck that uses lots of cheap spells,  like Tempo Mage, this card isn’t as good as Mana Wyrm as a 1-drop.

So I don’t see where it fits in to top level constructed decks right now, but maybe there is a home for it. We will have to wait and see how the META changes after all the cards are released from One Night in Karazhan.