With Witchwood being released on Thursday 12th April and all the cards now revealed, the fun with theory crafting decks starts.

The only drawback with Hearthstone is the cost of crafting (or opening) all the cards you need to make the top-tier decks.

Hopefully, you’re lucky (or rich) enough to open and craft all the cards. However, if you’re not don’t worry I’m here to help.

Below are some of the best legendaries from the set. Not just in my opinion, I’ve read, theorized, looked at trends, and asked pros what their opinions are.

With that being said, here are the Best Witchwood Legendary Cards to Craft with dust if you’re not lucky enough to rip them from packs.

It’s going to be dust well spent, these are the legendary cards that will see the most play for at least the next 4 months until the next expansion. 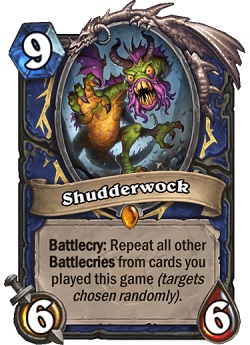 This is a tough card to evaluate, and seeing it in action on the live reveal stream only made things worse.

Maybe ‘best’ isn’t the right word, but we are going to see a lot of this card being played. From a pure fun factor standpoint, you need this in your collection.

Let us not forget that before Yogg was released the general consensus was that it wouldn’t be any good – the reality was that it was so good it had to be nerfed. 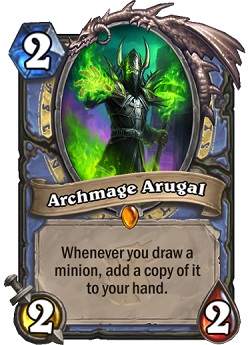 Archmage Arugal looks underwhelming at first glance, but there are loads of potentially powerful combos and synergies. Not to mention that we are in a control/value heavy meta that doesn’t look like changing any time soon.

Leyline Manipulator will reduce the cost of the duplicates, we are getting more card draw this expansion for mage too. Some interesting potential with quest mage too, I see this card making the cut. 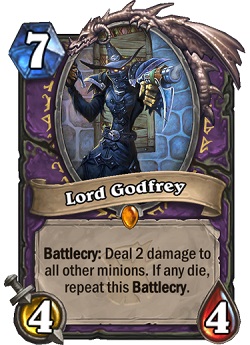 Warlock emerged as the strongest class with several archetypes in the Kobolds and Catacombs meta, and Blizzard decided to add two more powerful legendaries to the class.

If defile isn’t enough to clear the board and set up for a Gul’dan play then Lord Godfrey probably is. Control and Cubelocks aren’t going anywhere anytime soon…. 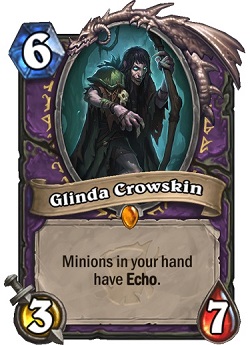 Glinda is going to see a lot of play, especially as this card can work in both aggressive and control decks.

The Echo effect is extremely powerful. The real swing turn comes with Glinda sticking to the board, although you can still drop 4 1-drops and get 3 free cards on turn 10.

But simply playing her means your opponent has to kill her, if not you’re going to do something crazy. 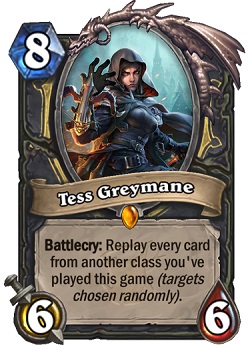 This is a really interesting card and will take some thought behind the deck it goes in, and the cards you play before playing Tess.

There is no doubting the value though. It’s a bit RNG-heavy as you’ll be picking up and playing random cards, but she works like pre-nerf Yogg and casts everything even if she dies. 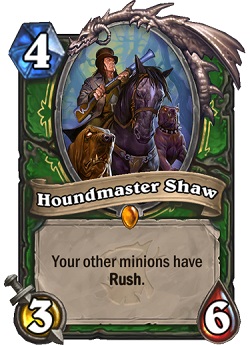 Hunter has some of the most interesting cards in The Witchwood set, and a lot of them work well with Houndmaster Shaw.

The 3/6 body is strong and worth the 4 mana so it’s likely to stick a turn, and the effect gives all your other minions Rush.

This gives you some tempo options to take the board and choose your value trades, this card will be in a lot of hunter archetypes.