This is the Call of the Wild Nerf nerf/card balance change for Hunter coming in October. 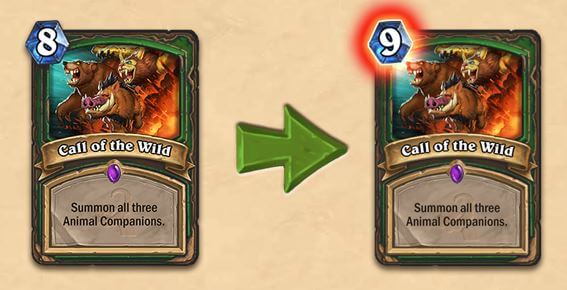 As you can see, the mana cost is being increased from 8 mana to 9 mana. A decent change but the card still has really good value for 9 mana in my opinion.

How Will This Change Affect Hunter?

Midrange Hunter isn’t a tier-1 deck right now. It’s certainly a few strong deck and has some really favorable matchups, but this card did need a nerf.

I don’t think it makes too much difference. You can still just curve into an 8 drop then Call of the Wild. Ragnaros on 8 looks even better now. Or you can taunt up on 8 vs aggro and play Call of the Wild after.

Here are comments directly from the developers about this change to Call of the Wild:

Although Call of the Wild is intended to be a powerful late game option, it is over performing at 8 mana. By moving it to 9 mana we intend to tone down its power enough that it won’t be an automatic inclusion in every Hunter deck and overshadow other strategies.