The top 8 players who qualified from the EU Summer Prelims are meeting in an 8 man tourney at the EU Summer Championships this weekend 24th and 25th September 2016.

It’s always interesting to see the decklists of the players beforehand to see how they have prepared and what they are teching for. Cerasi EU Summer Championships decklists are below. He has a strong lineup opting for mostly strong META decks/classes.

This is high-stakes stuff, the winner moves on to Blizzcon to play for the big money in a tournament vs the other seasonal championship winners. You can watch all the action on the Hearthstone official Twitch channel – playhearthstone.

The 8 players playing in the EU Summer Championships are (click name to see decklists):

You can check all the key dates and previous players to qualify for Blizzcon here. 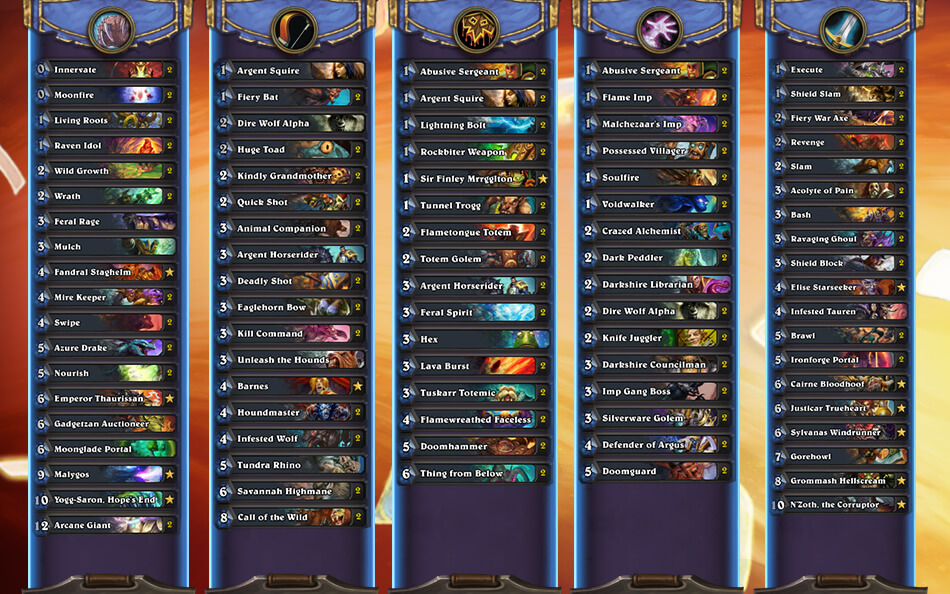 Druid is a staple in every player’s lineup. This is the Malygos Druid that’s been terrorizing the ladder and will be bagging wins over the weekend.

Hunter is the fifth class most players fall back onto when they need to fill that fifth spot. It’s a midrange list with some extra aggro cards teched in.

Another aggro Shaman list. Cerasi has included one copy of Hex, a smart choice and it’ll give his opponents something to think about before dropping a huge threat.

Not many players are bringing Warlock to the championships. Warlock has fallen out of favor slightly since Shaman became more competitive with cards like Spirit Claws and Maelstrom Portal.

A N’Zoth Control Warrior list with the new Ironforge Portal’s. A strong deck and when it draws well it’s almost unstoppable.