This is the Charge nerf/card balance change for Warrior coming in October. 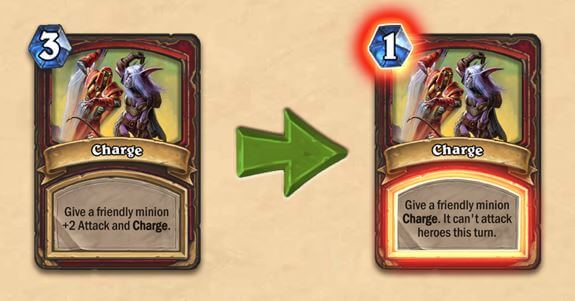 This is a much-needed change. There is nothing fun about losing in one turn to OTK Warrior, or Blood Warrior with Arcane Giants + Charge killing you in one turn.

How Will This Change Affect Warrior?

There are more than enough Warrior builds that I personally will not miss the crazy OTK decks that relied on this card. It was fun while it lasted but bouncing 60 + damage off your opponents face is a thing of the past!

Here are comments directly from the developers about this change to Charge:

While we enjoy seeing players explore combo styles of play and will continue to support it in the future, we’ve seen in the past that the ability to give Charge to minions that don’t normally have it has been particularly problematic and also heavily restricts future cards. We’ve redesigned the card Charge in a way that provides opportunities for minion combat, but does not enable strategies that intend to win without allowing opponents to interact.