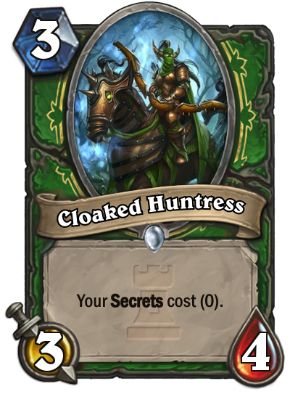 This is the Cloaked Huntress HS Hunter Card being released with the adventure One Night in Karazhan. It synergizes with secrets and looks like a really good card.

The text reads: Your Secrets cost (0).

So when this minion is in play you can play your secrets for 0-mana. That’s pretty insane really. We thought the Mad Scientist was powerful when that was in Standard Format. This card is even better, you can load up as many secrets as you want at no cost.

With a 3/4 body for 3 mana it’s decent stats too and will trade with some other 3-drops. Looking forward to seeing this card in play.