The top 8 players who qualified from the EU Summer Prelims are meeting in an 8 man tourney at the EU Summer Championships this weekend 24th and 25th September 2016.

It’s always interesting to see the decklists of the players beforehand to see how they have prepared and what they are teching for. DrHippi EU Summer Championships decklists are below. He has a strong lineup opting for mostly strong META decks/classes.

This is high-stakes stuff, the winner moves on to Blizzcon to play for the big money in a tournament vs the other seasonal championship winners. You can watch all the action on the Hearthstone official Twitch channel – playhearthstone.

The 8 players playing in the EU Summer Championships are (click name to see decklists):

You can check all the key dates and previous players to qualify for Blizzcon here. 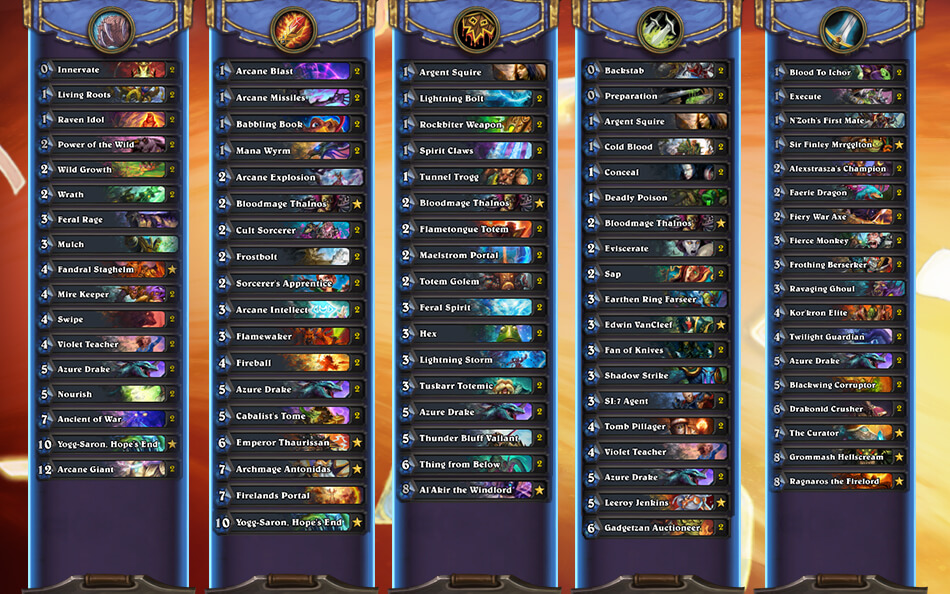 Not much to talk about here, a standard token Druid with Yogg list.

DrHippi is the only player to bring Tempo Mage. Cosplaygrill has proven it’s a top-tier deck right now so I don’t blame him, it’s a greedy list almost leaning towards being a control deck in my opinion.

The only player to bring Al’Akir the Windlord too I believe. Some burst potential for his opponent to be wary of, and a strong midrange list.

A pretty standard Miracle Rogue list. The only player in the championships to bring a Rogue without Questing Adventurers.

A bog standard Dragon Warrior list. Still strong vs most classes, and if it’s not banned it shouldn’t struggle to pick up a win.