This is the Execute nerf/card balance change for Warrior coming in October. 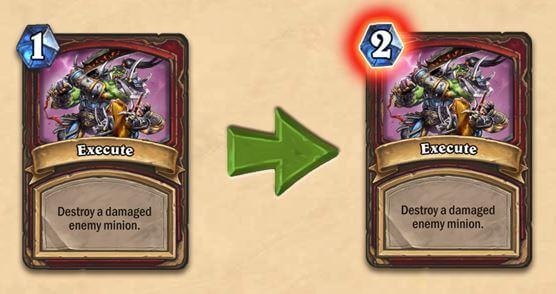 As you can see, the mana cost is being increased from 1 mana to 2 mana. A pretty big change, and one that I’m happy to see. 1 mana has always been too cheap to remove any minion in the game that’s damaged.

This nerf came as a bit of a surprise though. I don’t think anyone in the community saw this coming.

How Will This Change Affect Warrior?

There are too many strong Warrior decks in the current META. Control Warrior will not be bothered by this change, they always have spare mana floating.

It’s the Tempo decks like Dragon Warrior and Tempo Warrior that take a slight hit. 1 mana to remove an opponents minion was a huge tempo swing and I think it adds some balance to these matchups.

Here are comments directly from the developers about this change to Execute:

The Warrior class has access to a large amount of removal spells, and while we want to continue providing Warrior players with powerful removal options, Execute stands out as one that has proven to be too efficient in too many situations. We’re increasing the cost of Execute from 1 to 2 Mana in order to keep the card as an option closer in power level to other existing and future removal tools.