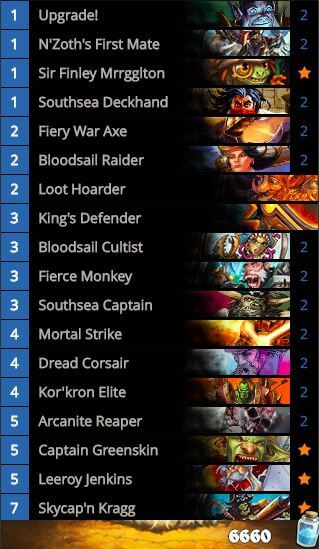 This is the Forsen Pirate Warrior OG Standard Deck he has been playing on stream in May 2016 with a decent amount of success.

There are a few differences to the pirate deck I played this season. Most notably the addition of Loot Hoarder and King’s Defender. With 7 weapons and two Upgrade! you’re going to be slinging weapons most turns.

It’s an aggressive deck. You will find yourself flipping from board control to face very early in the game. By the time you have an Arcanite Reaper in hand and are dropping Upgrade! on it you will almost certainly be hitting face or losing the game.

This deck is easily good enough to pilot you to legend, I’ve been using a similar deck at legend this month and had a lot of fun. Similar variations were also seen in the Americans Preliminaries. So, if you hit a losing streak don’t give up on the deck. You will struggle against a control heavy META, but that’s not the trend right now.