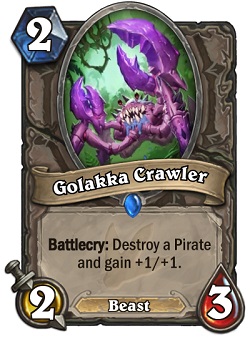 This is the Golakka Crawler HS Card from the Journey to Un’Goro expansion due for release in April.

It’s a Neutral class minion and the card reads: Battlecry: Destroy a Pirate and gain +1/+1.

You can get Golakka Crawler by opening packs from the Journey to Un’Goro set.

*Am interesting answer to the Pirate heavy META after the release of Mean Streets of Gadgetzan. This little guy will gobble up Patches the Pirate in a hurry.