Wondering how much will One Night in Karazhan cost when it’s released on the 11th August 2016?

Here is the full pricing table as released by Blizzard. 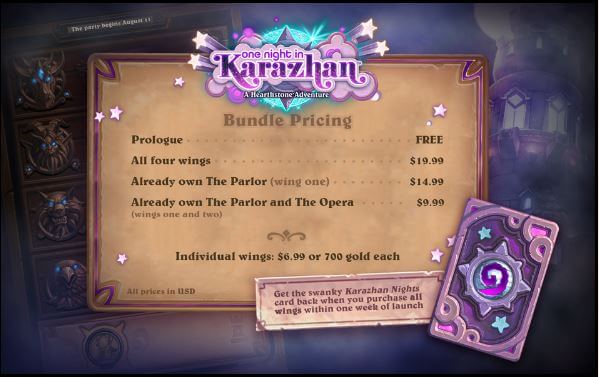 These are the USD$ prices, but you can work out the approximate costs in Euro’s or British Pounds pretty easily.

It’s a typical price per an adventure. Having the Prologue for Free isn’t normal though and is pretty cool. 2,800 in-game gold for all 4 wings isn’t a lot of gold and most will be able to pay for the expansion this way.

You won’t get the card back if you do that though. You have to pay for the entire adventure in cash within the first week if you want the card back.

There is no pre-ordering as there have been with previous adventures and expansions either. You’ll have to wait until the 11th August.

The price from Blizzard through the game client and iOS is £1 different in the UK.

The One Night in Karazhan adventure will cost you £13.99 from Blizzard. While it costs £14.99 if you buy through in-app purchases on the iPhone.