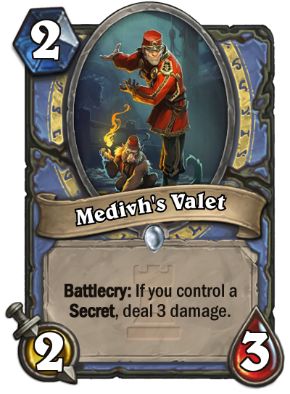 This is the Medivh’s Valet HS Mage Card being released with the new adventure One Night in Karazhan.

The card reads: Battlecry: If you control a Secret, deal 3 damage.

Secrets are not played as often in Standard Format due to Mad Scientist being rotated out to Wild Format. So this card with either see play in Wild, find it’s way into a new deck build in Standard, or not be good enough to see play.

It’s hard to tell at the moment. It’s not a really powerful card on its own so it may not see a lot of play. Time will tell.