Tempo Mage was the strongest Mage deck for months but was finally dethroned after the release of Mean Streets of Gadgetzan.

Reno Mage lists are much stronger in the current META and although this deck may not be seen as one of the Tier-One lists it’s strong enough to take to legend for sure.

The only real drawback is the lack of card draw, but if you manage your resources well you can climb the ladder with a good win %.

We have a new rank 1 legend deck for the September season 30 ladder. This is the Thijs Rank 1 Legend Medivh Mage Deck he hit rank 1 with on the 4th September.

I’m sure various other decks and classes have hit the top spot, there are some ridiculously strong decks like the Dragon Warrior and Malygos Druid builds.

You want to start off as you would with any Tempo Mage build. Mulligan hard for 1 drops to get a fast start. Babbling Book is fine, then curve into Cult Sorcerer and cheap removal spells.

You can also rely on Neviilz to build a Reno list using newly released cards. This is the Neviilz Reno Mage w Netherspite Historian Book Wyrm from the fourth wing of One Night in Karazhan.

It’s a crazy list but has everything you need to beat most decks. You have N’Zoth as a late game win condition, card draw, dragon synergy, Elise Starseeker, Malygos for an OTK finish, it’s crazy fun, enjoy!

Medivh, the Guardian has finally been released, and early signs are that it’s pretty darn awesome. This is the Hotform Medivh the Guardian Mage Karazhan Deck he was playing on stream and he hit a pretty long win streak.

The value from Medivh is really good when used with anything from a 5 mana spell upwards. If you compare it to Ragnaros, in most instances you’re better off playing Medivh, the Guardian.

You get a 7/7 body that can attack any target, and 3 minions from spells in the following turns. This card is going to make some changes to the current META.

Freeze Mage has seen a rise in popularity due to seeing some success in recent major tournaments. This is the Kranich Karazhan Freeze Mage Deck he was laddering up with successfully, it’s still a good ladder deck and only really drops out of popularity when control Warrior is really popular.

This is the Trump Control Mage Deck w Arcane Giants he put together and was playing on stream. Control mage is an archetype that’s never quite hit the mark before. Reno Mage comes close, and can play out like control, but we haven’t had a really good Control Mage since the old Grinder Mage days.

Trump has put some strog minions, some game-stalling tech’s like Frost Nova, a Cabalist’s Tome for extra draw, and of course the new card Arcane Giant’s – which you will no doubt get to play for free.

You’re going to play a slow game so it’s ok to keep Arcane Intellect in your opening hand. Try and pick up some cheap early removal to control the board like Arcane Blast and Frostbolt. Don’t be afraid to cycle the Forgotten Torch early even if it’s overkill on a minion, the spell reduces your Arcane Giant and you get closer to the 3 mana, 6 damage Flaming Torch.

used on stream to make it to legend this season (season 29 August 16).

It’s an interesting deck with a few more options than the typical Freeze Mage list. It does run Reno, however there are 7 duplicate cards in the deck. You will not need Reno in most games, but in the games that run long and you’ve drawn most of your deck it’s an extra win condition.

The most interesting card is Anomalus. This is the Mage legendary that included in the Whispers of the Old Gods expansion. It does 8 damage to all minions when it’s killed, which is a huge board clear that will almost certainly clear everything.

You play this deck out like most Freeze Mage decks. Draw and freeze or kill minions until you can Alexstraza your opponents face. Then burn then. It’s only really Warriors or Priest that armor up and heal a lot that really counter this deck.

Looks pretty tough doesn’t he? Deathrattle: Deal 8 damage to all minions. There aren’t many minions that will survive that fall-out.

It’s perfect in Freeze Mage for clearing the board. The only real hard counters are cards like Hex and Polymorph. 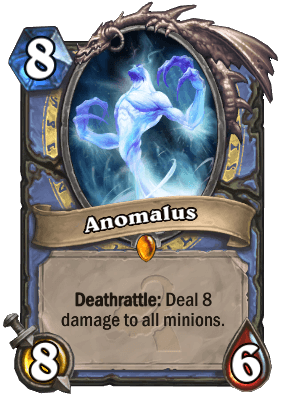 Firelands Portal. This is the Thijs Karazhan Tempo Mage he was playing on stream today, and seeing him go past rank 100 legend with it, it’s obvious it is a really strong META deck right now.

Firelands Portal isn’t a crazy broken card, but it is strong. Thijs made room for the two Fireland Portals by taking out what would usually be Ragnaros, and Flamestrike.

This is a heavy burn Tempo Mage deck. So don’t be afraid to throw burn at your opponents face and hope to draw into more. Fighting for the board isn’t always the right thing to do, it’s something you need to evaluate in the game you’re playing.

It’s still not a really solid Tier 1 deck. So you will be relying on Yogg-Saron to do what Yogg-Saron does and save you in some games. But that’s part of the fun of this deck.

on stream to climb from the dumpster into the high legend ranks <100.

Firelands Portal is an interesting card that’s still being tested but does seem to have a home in the slower Tempo Mage deck lists like this one. This deck has Emperor Thaurissan and Ice Block, so it’s built for the longer games than the heavy burn Mage decks.

August. The prelims are always fun to watch, and you can see the best players across Europe battle it out with their best decks.

Thijs has already qualified for the World Championships at Blizzcon. I think this is the reason why his decks are a little more unique than most, which will make a much more interested set of games.

This is the Thijs EU Summer Prelims Freeze Mage Deck he will be using. Freeze Mage is a good control deck that has a lot of favorable matchups. It’s harder to learn than your average deck, but watch Thijs and pick up some tips then give it a go yourself.