The META is far from refined, but the OTK combo mage has is pretty crazy.

You can launch infinite fireballs! 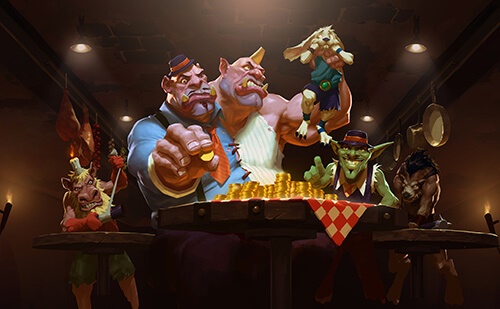 Check out this Neviilz Murloc Aggro Paladin Gadgetzan List. Finja, the Flying Star is an awesome card in murloc decks.

Bringing two Murlocs on to the field can swing a game, and the aggressive low curve can be refilled with Divine Favor. This is a fun deck.

There are three cards from the latest Karazhan expansion:

Fool’s Bane – This is used to clear up several small minions against aggro decks. Great value card and can give potential swing turns.

Violet Illusionist – Health is important in fatigue matchups. This card allows you to use weapons without taking damage. Used in combination with Fool’s Bane or Gorehowl it’s a good value card.

Ironforge Portal – Another good inclusion in a fatigue match. More armor and a random minion to challenge the board.

Control Mage is back with the new Karazhan cards. This is an interesting list, it’s the Neviilz Karazhan Control Mage Deck September 16 he was playing on stream. The list includes Medivh’s Valet, Avian Watcher, Babbling Book, and The Curator from the new adventure.

Like most Neviilz decks there are a lot of tech cards and synergy between different cards in the deck. The double Ice Block means you’re often playing on the edge of dying, then using Alexstraza to gain health and let your opponent over extend so you can board clear.

Who is the best Hearthstone meme deck creator and player on Twitch? Neviilz 🙂 This is his latest creation, the Neviilz Barnes Resurrect Meme Priest Deck September 16. It’s a pretty decent deck too, resurrect Priest decks are really strong and have a lot of good matchups.

Rolling Barnes in this deck is always fun. You can get a 1/1 Ysera, Y’Shaarj, Ragnaros, Sylvanas, there’s loads of minions that can win you the game on the spot.

You can also rely on Neviilz to build a Reno list using newly released cards. This is the Neviilz Reno Mage w Netherspite Historian Book Wyrm from the fourth wing of One Night in Karazhan.

It’s a crazy list but has everything you need to beat most decks. You have N’Zoth as a late game win condition, card draw, dragon synergy, Elise Starseeker, Malygos for an OTK finish, it’s crazy fun, enjoy!

This is the Neviilz Dragon Murloc Rogue Deck w The Curator he was playing on stream. As you’d expect with a Neviilz deck, there are some interesting card choices in this deck.

This deck has all of the Mill Rogue mechanics to mill your opponents out. The Curator helps you draw those Coldlight Oracles. The main reason Mill Rogue loses is when you don’t draw these early enough. You still have to wait until turn 7 to play The Curator but at least it’s a guaranteed draw with a Taunt at that point.

It’s a fun deck to play, give it a try and see how you get on.

Totem Shaman decks have finally become a legit top tier deck. This is the Neviilz Totemic Might Shaman Deck w Wicked Witchdoctor the new card from One Night in Karazhan wing two.

These decks are incredibly fun to play and as soon as you start chaining spells with Wicked Witchdoctor you start filling the board with totems. Give them a buff with Totemic Might and they become hard for your opponent to remove, then Bloodlust for the win!

You can catch Neviilz on his Twitch channel to see VOD’s of him playing this deck, and I’m sure he will be playing it a lot more in the coming days.

Mulligan hard for your Argent Squires, Totem Golems, and Flametongue Totems. You don’t want Witchdoctor until turn 5 or so when you also have a spell or two in hand ideally. Keep the Maelstrom Portals vs Zoolock, and Tuskarr Totemic on the coin if you have a one drop.

This is the Neviilz Karazhan Malygos Shaman w Barnes Arcane Giant Deck. You can usually rely on Neviilz to build a meme deck that’s fun, and pretty damn good.

This deck has most of the pieces of a midrange Shaman build, along with the new cards Barnes, and Arcane Gaint’s. Shaman has always been a good choice for Malygos builds, the burst from Lava Burst, Lightning Storm, and Lava Shock is insane.

The deck has 20 spells, so cycling through Gadgetzan Auctioneer and reducing the cost of those Arcane Giant’s is going to happen more often than not. Give it a try and see how you get on.

With almost all of the early game being spells in this deck you’re going to hero power a few turns. Try to pick up Far Sight and Ancestral Knowledge, as well as a board clear like Lightning Storm vs Aggro decks.

You goal is to fill you hand and give yourself as many options as possible early into the game.

I’m see more of the evolve decks playing at high legend, and Neviilz is partly to blame. This is the Neviilz Karazhan Evolve Shaman Deck he has been playing on ladder. There are quite a few lists going around, which makes the deck even more interesting.

The fact that you just want as many minions on board to evolve means you can play around with some different minions and see what works for you. It’s the minions you get from the evolve that is of most interest.

I have to stop evolving 1-cost minions, the frequency that I get a Doomsayer is just ridiculous. You’ll probably have better luck than me though, although evolving the 3-cost minions seems to be the sweet spot.