This is the Thijs Secret Midrange Hunter Deck Oct 16 he was using to climb the ladder.

Even though Call of the Wild took a small hit from the nerf hammer recently, Hunter is more popular than ever and a legit strong deck. The secret synergy with Cloaked Huntress is pretty insane really, I’ve been playing this deck and dropping 2-3 secrets on curve for 0 mana and winning games.

Barnes is a great choice in this deck too. There are so many minions with deathrattles or passive effects that you almost always roll something useful. And, if you roll a 1/1 Ragnaros or Savannah Highmane your chance of winning doubles on the spot. 🙂

Interestingly it only has one copy of Patron Warrior. It does include the Blood Warriors and Arcane Giant mechanics though, so you have more than one win condition.

It’s a solid deck. You have plenty of card cycle, board clears, and some huge minions for big damage. You also have a copy of Elise Starseeker if it looks like the game it going to run long and you want to try your luck with the Golden Monkey.

This is the Trump Renounce Darkness Warlock w Y’Shaarj he’s been playing on stream this season. (season 31, oct 16).

Renounce Darkness is a fun card and there have been some interesting decks that have used this card. This is actually one of the stronger lists, Y’Shaarj is a fun card also, and played with Barnes there is a good chance you will be able to pull it out early.

This combo of Barnes into Y’Shaarj is one of the strongest combos in the game and has been used in Hunter a lot. After flipping all your Warlock cards and getting some discounted cards there are some crazy things that can happen! 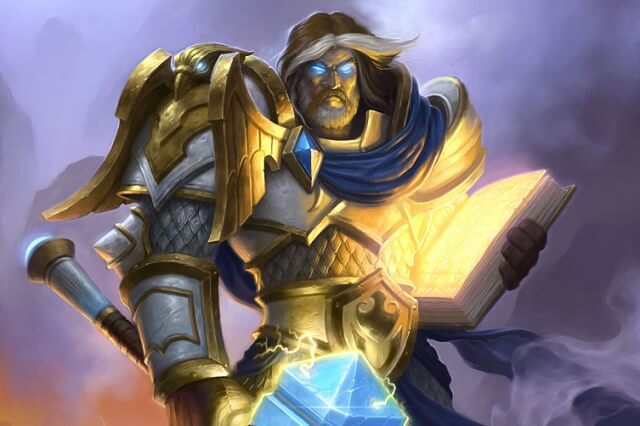 There are some interesting tech choices in this list. The double Crazed Alchemist is some much needed anti-Shaman tech’s in this META. I like the Defender of Argus as there is a lot of weapons inflicting direct damage right now. You could even swap this for Harrison Jones if you prefer.

If you’ve not played aggro Paladin with Steward of Darkshire before the deck gets its strength from the divine shield synergies. Divine Shields enable you to trade up and still have your minions on board. Play the deck out like you would a Zoolock build. Trade as much as you can and push through with burst from cards like Leeroy Jenkins and Blessing of Kings when you’re pressing lethal. 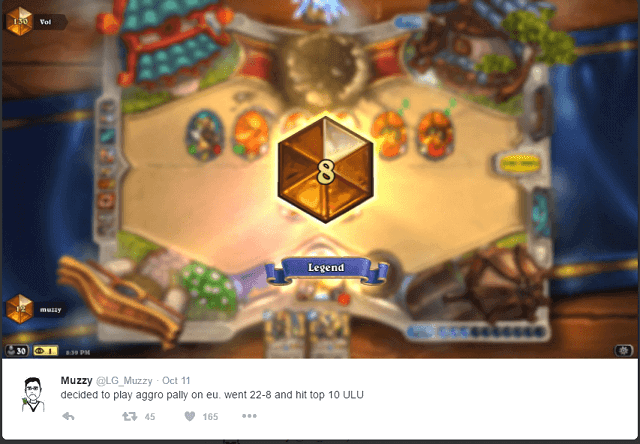 This is the Superjj High Legend Malygos Rogue Deck Oct 16 he was playing on stream at high legend ranks. There are a few Malygos Rogue lists going around at the moment and it’s a really decent tier-2 deck that can win vs any class with a little luck and RNG on your side.

The game plan is a simple one.

Spell Damage of Rogue Cards with Malygos on Board

*Remember that Shadow Strike can hit face if your opponent is at full health.

This is the Xixo Rank 1 Legend Malygos Druid Deck Oct 16 he used to hit top spot on EU.

The interesting tech changes over the other Malygos Druid lists are Harrison Jones and Baron Geddon. These are anti-Shaman cards and helps swing this matchup much more into the Druids favor.

It’s a Shaman META, time to start teching to beat down those Shamans! This list also performs well in the Malygos Druid Mirror match too with Ragnaros and double Feral Rage for armor gain.

This is the Savjz Dragon Druid Legend Deck Season 31 Oct 16 he was playing at high legend. I’ve seen a few dragon Druid builds and they always seem to be missing something to be really competitive.

This list includes Netherspite Historian and Book Wyrm from the last adventure, One Night in Karazhan. I like the defensive Chillmaw and potential for Brann Bronzebeard combo’s in this deck.

It was performing well for Savjz at high legend so it’s a strong deck if you want to give it a try and ladder up.

This is an interesting deck I was watching Hotform play inside the top 10 legend on NA this week. It’s a Y’Shaarj, Curator Druid Deck.

Control decks are doing really well since the nerfs on a few of the aggro cards. There isn’t so much threat in the first few turns and once you stabilize if you’re playing control you’re going to pull away from those annoying aggro decks.

There is loads of synergy and strong combinations in this deck. A Fandral, Ragnaros or Y’Shaarj from Banes is pretty insane. Arcane Giants for 0 mana, Stampeding Kodo’s, it’s a fun deck!

I’ve played a few games with it and it seems to do well vs Shamans, but it pretty horrible vs Hunter’s which seem to be popular right now. See how you get on.

The downside to Malygos Rogue vs Malygos Druid is that you often need Malygos to stick a turn or two to really get the OTK value. You can pocket some coins to help squeeze out some extra burst, see how the games play out for you and how much damage you can do in one turn.

It’s unfavored vs most Warrior builds which sucks right now as there are a lot of Warriors. But you can sneak a win with a well-placed Ooze and a little luck. It’s almost impossible to recover from two early Brawls though. So don’t be too hard on yourself if this happens.