This is the Rockbiter Weapon nerf/card balance change for Shaman coming in October. 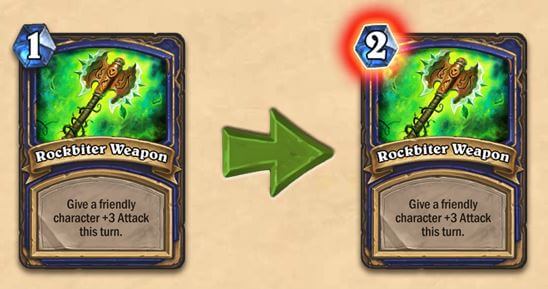 As you can see, the mana cost is being increased from 1 mana to 2 mana. A pretty big change that will take a little bit from the early board control and burst damage from Aggro Shaman.

Shaman is way too powerful right now so this is a change in the right direction. It’s hard to see exactly what the effect will be on all the decks, but I can’t imagine too many people will be complaining about this one.

Possibly changes some early game decisions like coin + Totem Golem, and setting up an x turn kill with Doomhammer + Rockbiter.

Here are comments directly from the developers about this change to Rockbiter Weapon:

Rockbiter is the culprit of a few mass burst-damage combos in addition to being a reliable early game removal tool. Due to its strength in a variety of circumstances, it’s been one of the most widely played Shaman cards in Hearthstone’s history. Making changes to Basic cards that show up in every deck will help instigate more variety and help the Standard format succeed in the future. We’re preserving some of the synergistic potential of Rockbiter Weapon but decreasing its value as a removal tool by changing the cost of the card from 1 to 2 Mana.

We considered other Shaman cards like Tunnel Trogg and Totem Golem, but these are both leaving Standard relatively soon, so we thought it would be better to change Rockbiter and improve the Standard format in a more permanent way.