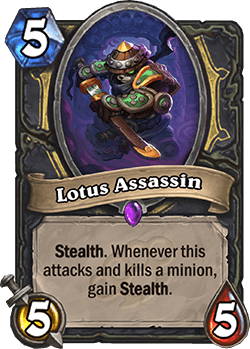 One of the first cards to be released from the Mean Streets of Gadgetzan is this Lotus Assassin HS Rogue Card.

The card reads: Stealth. Whenever this attacks and kills a minion, gain Stealth.

More stealth mechanics for Rogue to make use of. It’s similar to the Stranglethorn Tiger with the potential for more time in stealth, interesting card.