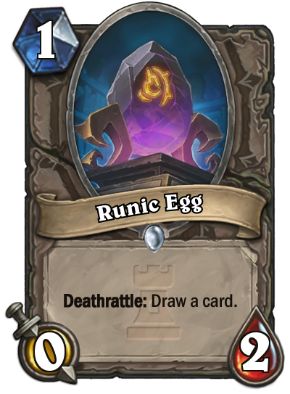 This is the Runic Egg HS Card released as part of the card set unlocked in the adventure One Night in Karazhan.

It’s hard to see where and why you would put this card into a deck. 1 mana is a cheap way to cycle a card so maybe this card will find its way into decks that need to cycle hard for a combo. But it’s not a good card and isn’t going to shake up any decks builds, that’s for sure.