This is the Tuskarr Totemic nerf/card balance change for Shaman coming in October. 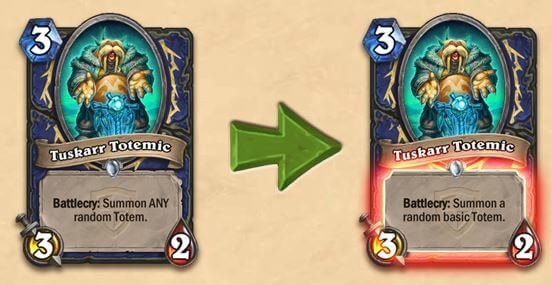 As you can see, the card text is being changed from, Summon ANY random Totem to Summon a random basic Totem. Rolling a 3/4 Totem Golem has been a huge tempo advantage for way too long, this is a change (almost) everyone has been looking forward to!

Shaman is way too powerful right now and there are a lot of different decklists being played. This does weaken the class overall but it’s not make or break.

Rolling another body is still a good battlecry, and there is a lot of synergy with totems in general so I think the card will still see plenty of play. Instead of being overpowered, it’s just a strong class card now, as it should be.

Here are comments directly from the developers about this change to Tuskarr Totemic:

We like that Tuskarr is contributing to totem focused decks, but currently the power level is centered around the possibility of summoning cards like Totem Golem or Mana Tide Totem. This isn’t the most fun type of randomness for a card that is low mana and sees this much play. We want this card to be an option for decks that take advantage of extra totems through cards like Thing From Below or Primal Fusion, but a weaker option for players looking for standalone high power level options on turn three. That said, we are adjusting the battlecry for Tuskarr Totemic to only summon basic totems.