No surprises here but the Best Warrior Deck January 2017 Season 34 is Pirate Warrior. Taunt Warrior is fun, Control Warrior is pretty strong, but Pirate Warrior is still pretty silly. You can win any game if your opponent doesn’t draw enough heal or taunts to stop the face damage.

It’s nice and easy to play, the games are fast, and love it or hate it, this deck isn’t going away for a while. There are some decent decks to counter Pirate Warrior if it’s really popular.

This is the best Pirate Warrior Season 32 Nov 2016 list. Pirate Warrior hasn’t changed much in recent months as there hasn’t been any new cards since One Night in Karazhan.

It’s one of the most aggressive, and fun decks in the game in my opinion. It’s incredibly frustrating when you don’t draw well, but that’s what you sign up for when you play all out aggro decks.

Mulligan for weapons and your 2-cost minions. Use your weapons to make favourable trades on board while going face with minions. It takes a little practice to start gauging when to go face, and when you can plan lethal for the following turns, but you’ll get the hang of it.

This is the Purple Coldlight Combo Mill Warrior Deck Nov 16 he was playing in the top 10 legend early on in the season.

It’s an interesting deck that has several win conditions. But the main combo in the deck uses fatigue to kill your opponent.

When you use Brann Bronzebeard + Coldlight Oracle you and your opponent draws 4 cards. If you use both Coldlight Oracles that’s 8 cards each. If you enter fatigue as you pull all these cards that’s more than 60 damage!

So how do you not die at the same time? Violet Illusionist. You’re immune to all damage while you have this card in play. So, you can use this minion on board while clearing up minions with Fool’s Bane, and if you need to be immune while drawing you can play her out.

This is why Emperor Thaurissan is in the deck. Ideally you want to get an activation on all of these key cards to make this combo easier to play. Don’t be afraid to use it just to burn some of your opponents cards during the game too if they are holding a big hand.

This is the Sjow Pirate Warrior Deck Nov 16 he was using to climb the ladder fast at the beginning of the season.

I have a love-hate relationship with Pirate Warrior decks. I love playing them, but I hate drawing bad or losing to a taunt on the other side of the board.

Some people do really well with these lists but it is really draw-dependant. It seems like one miss-step and you can’t win to me. I still fire out a load of games with Pirates every season for the fun factor though. Give it a go and see how you get on.

With the nerfs to Charge and Execute it’s been interesting to see how the Warrior deck lists have changed. This it the Thijs Cycle Charge C’Thun Warrior Deck Post Nerf he was playing on stream.

As suspected, Execute is still playable in Warrior decks and the change from 1 – 2 mana isn’t going to do much. Charge now has some interesting synergy, I’ve seen it being testing with a few different minions. I doesn’t look like the nerfs have hit Warrior very hard. Sometimes these changes make more sense when future cards are released.

I’m a huge fan of Pirate Warrior decks. I think it’s the most fun hyper-aggo deck that’s still good enough to hang vs a few of the classes.

I thought I’d share this Naiman Pirate Warrior Deck Oct Season 31 he has been playing on stream and has a decent win rate with.

It’s similar to most of the Pirate Warrior lists that have been bouncing around. I think it’s only become a litter strong since the nerfs rolled out this week. Rockbiter and Execute were always good counters to your aggression so an extra mana tagged on might just give you that extra turn you need.

Thijs was pretty quick to write off Prince Malchezaar as a bad card. After pressure from his chat to play it in a deck and test it properly, I think he changed his mind a little. This is the Thijs High Legend Prince Malchezaar Yogg Warrior Deck he was playing on stream, and having fun and doing pretty well too.

Prince Malchezaar is an odd card, and it doesn’t have a home in many decks. But Control Warrior is one of the decks where it actually serves a purpose.

Playing this card in Control Warrior gives you 5 extra cards to keep fatigue at bay longer. You also have a lot of removal and time to make decisions with Control Warrior, so you don’t rely on the random legendary cards being really useful.

At worst, you can just use them as extra cards for the Monkey to change again because Elise Starseeker in the deck. It’s pretty fun playing this deck, and you’re almost guaranteed to win in the mirror match – after 30 minutes!

Anyone following the Hearthstone tournament scene will know that Fr0zen won

This tourney was a pretty big deal and most of the best Hearthstone Pro’s were there. So, to win it was pretty damn awesome, and I thought I’d look at the decks he used.

He turned up with 5 of the strongest META decks, and although sometimes tournament decks are sometimes teched to deal with certain classes, his decks are pretty standard strong ladder decks. He used:

Dragon Warrior is still a really strong deck and the recent new cards from Karazhan only made it stronger. This is always a good choice as a tournament deck, but don’t be surprised if it’s banned in formats that allow one ban. If you curve out well there aren’t many classes that can stop the pain.

This takes Control Warrior and adds a lot more threats and Yogg-Saron for a last-ditch attempt at winning when all else seems lost. 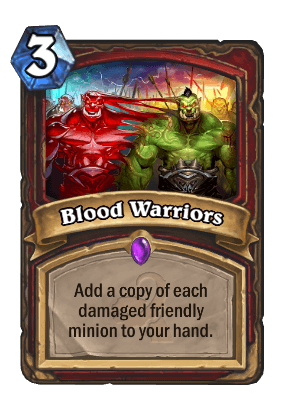