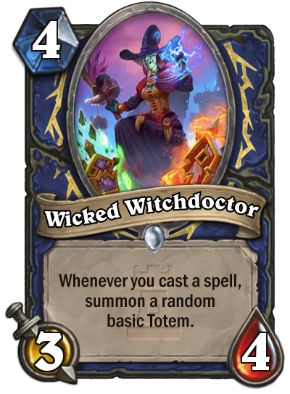 This is the Wicked Witchdoctor HS Shaman Card to be released as part of the Hearthstone adventure One Night in Karazhan.

The card reads: Whenever you cast a spell, summon a random basic totem.

More totem synergy and this card would fit in well with a totem Shaman build, as well as some of the other Shaman decks due to The Thing From Below being reduced in cost.

I can see this card seeing some play for sure. It’s below average on base stats, but makes up for this with the battlecry as it generates a token on board.