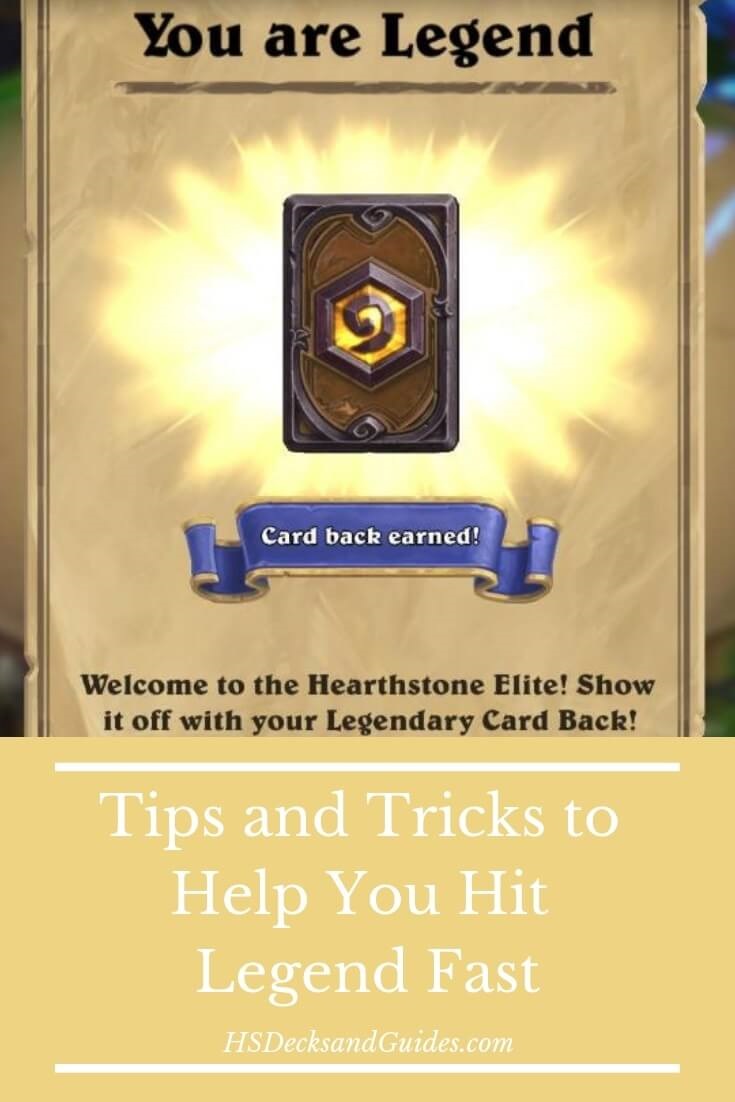 Hitting legend is the goal for most people who play Hearthstone. It’s the highest rank on ladder, sure there is then a legend climb ahead of you, but hitting legend holds the most prestige.

There are a few things that make is difficult to hit legend. But, honestly, for most people it’s the time and number of games that’s the biggest roadblock.

Realistically, the best case scenario is that it’ll take 30-40 games. If that’s the case, awesome. But it’s more likely to take around 100 games, and that’s a lot of games.

I make it my goal to reach legend as fast as possible each month, no point it taking longer than necessary.

I can usually go from rank 4 to legend with a 60% win ratio, so it takes around 100 games and probably about 8 hours total play time.

Want to speed up your run to legend? Here are my best tips to help make it as fast a climb as possible, let me know what you think.

Tips to Get Fast Legend in Hearthstone

Ok, the first thing you need to focus on is concentrating. Playing as fast as you can doesn’t mean anything if you’re dropping games you should be winning.

This means turning off Netflix on your other monitor, putting down the phone, stopping whatever else it is you multi-task with Hearthstone and giving it your 100% focus.

You can go back to multi-tasking later when you’re so familiar with your deck you can play it on autopilot.

You need to get in the mindset that every game counts though. Because every game does count. Everytime you drop a game that you could have won there is a two star deficite.

Not only do you lose a star, but you also don’t gain one like you would have if you’d won the game.

The old saying of practice makes perfect is no truer than when playing Hearthstone.

Every deck has loads of little nuances to learn through trial and error, you need to know the meta well and what to expect from other decks, and get better at optimizing your mulligan.

The best way to improve in all of these areas is to practice. This means play some games, some more games, more games, and so on until you’ve played vs all the meta decks over and over.

If you really want to get good with a deck and faster at playing it you’ll need to play it past the point of being fun.

You get 70 seconds per turn (excluding turn 1), that’s a lot of time. Honestly. It takes practice, familiarity with the deck, and concentration to play fast – but if you’ve taken note of the above point you’ll be doing all of this anyway.

Some people just play slow, I get it. But if you want to learn how to play faster, you certainly can.

Think of it like this; some players take 60 seconds a turn – if you take 30 seconds a turn, which is plenty of time, you can play twice as many games as them. That’s massive.

Rough math I know, but you get what I’m saying. I know I watch some streamers that take at least 4 times as long as I do per turn on average. So, while I can’t play 8 hours a day like them, I can play 2 hours and squeeze in more games.

The game changer here is to do most of your thinking during your opponents turn. It’s actually good practice for a number of reasons, not only will you save time but you can consider more outcomes, predict their best moves, and so on.

Choice of deck is really important. Put fun decks and meme’s to the side, we need to pilot a high win rate deck and squeeze out every possible competitive advantage.

You can upgrade to HSReplay Premium by clicking here.

With premium you can filter on your region, rank, use data from the last few days, and see exactly which decks are winning and which aren’t.

My advice is to pick the highest win rate deck you’re comfortable with and start learning it. Check back each day to see how the meta is changing, and only if your deck isn’t working, change it.

The same math applies to how fast a deck is. You have the option to play a slower control deck or a fast aggro deck that has half the average play time but has the same win rate according to stats.

If you’re trying to hit legend as fast as possible it’s a no-brainer, pick up that aggro deck and start hitting face!

Learn How to Manage Tilt

Tilt is term that refers to a persons mental state when things aren’t going well. When on ’tilt’ you’ll play worse, make mistakes, bad decisions, feel like you can’t get a break, and so on.

Tilt happens when you lose a few games, usually due to some crazy RNG that makes you feel like you’re the unluckiest person in the world.

In reality, you’re just experiencing some variance, like we all do, and if you keep a level head you’ll come out on the other side just fine.

The two-sided coin to tilt is that both you, and some of your opponents will tilt from time-to-time.

So, if you can manage your tilt and keep playing optimally, while taking advantage of other players making mistakes you’ll pick up those bonus stars.

How do you manage tilt? Everyone is effected differently, but as a rule there are a few things I recommend you do when things start going bad and you feel your frustrations rising:

Things to Expect on a Fast Climb to Legend

It’s more likely than not going to be a rollercoaster rather than a smooth upward climb.

I’ve had a few 70-80% win rate smooth climbs, but it’s rare. You’re more likely to hit some losing streaks, win streaks, lose some favourable matches, win some unwinnable matches, and see all kinds of crazy RNG moments – it is Hearthstone .

To make it as fast as possible the key things are to play a good meta deck, get good with the deck, avoid tilt, and keep grinding out those wins.