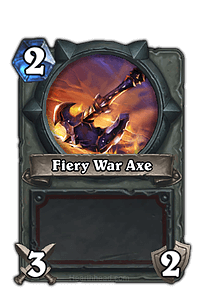 across a Warriors playing Firey War Axe on turn two an
d destroying your 1 or 2 mana drop. War Axe comes with two charges, so they usually get to remove your next drop too. It’s incredibly annoying and gives the Warrior player a decent tempo start.

If you find yourself asking the following:

Why Do Warriors Always Have Fiery War Axe in Their Opening Hand?

You are not alone! Trust me, we have all wondering the same thing. But how likely is it statistically that your opponent will have the Firey War Axe in their opening hand?

Let’s look at the basic math behind this scenario:

If your opponent is going first the chance of them not drawing the Firey War Axe from their 30 card deck based on two copies is:

Then there is the option to mulligan the hand to dig deeper into the deck for a copy:

This means, taking into account the next turn too the chance of not drawing a copy of Firey War Axe is:

What does all this boring math mean as an overall percentage?

Your opponent has 45% chance of having a Firey War Axe on turn two ready to smash your early minions.

When you look at the numbers like this it’s hard to believe that your opponents ‘always’ have the axe. A lot of this is just your perception. You remember the times they have it more than the times they don’t. Luck and numbers can feel so cruel at times, there’s a lot of RNG to deal with in Hearthstone!

The Conspiracy Theories behind Firey War Axe and More

Now, this is all pure speculation and conspiracy theories based on nothing other than wild rumours. But, there is a belief among many players that certain cards are ‘weighted’ to draw differently.

Certain cards are key to classes to be able to operate and compete with other classes. With Warrior it’s the Firey War Axe, with Warlock it’s Power Overwhelming, Rogue is Backstab, and so on.

Ever notice how all the above cards seem to always draw early or be in the persons opening hand? Conspiracy, or something more to this, I will let you decide.